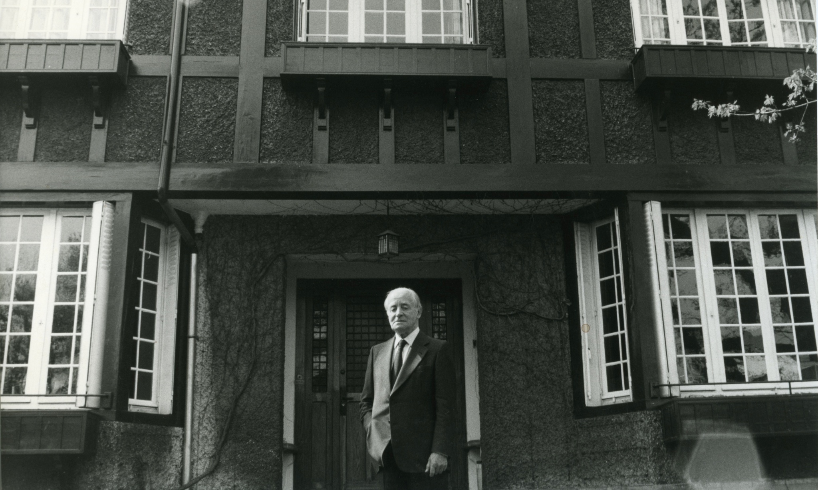 The Literary Institute (Instytut Literacki) is a Polish-language publishing house created by Jerzy Giedroyc in 1946 and directed by him between 1946 and 2000. After his death, Zofia Hertz was its director up to her death in 2003, after which Henryk Giedroyc headed the Institute until 2010. Its current director is Wojciech Sikora.
First and foremost, the Literary Institute published the monthly journal Kultura, which ran to 637 issues. It also published the quarterly Zeszyty Historyczne (Historical Notebooks) of which there were 171 issues. Between 1946 and 1947, in Italy, 26 book titles were published, followed by 9 in the years 1947–52 in France, and then 378 in the Biblioteka Kultury (Kultura Library) series inaugurated in 1953.
The Literary Institute came into being in Rome in early 1946 under the aegis of the Polish 2nd Corps, which loaned funds for the purchase of a printing press. The new company was registered as Casa Editrice Lettere.

The Free word
The end of the Second World War brought a disastrous outcome for Poland. In the face of Poland’s loss of sovereignty, Giedroyc decided to initiate a durable political and cultural project whose aims he conceived as decidedly long term – he saw the need to shape Polish opinion, both in Poland and in the Polish diaspora. In the context of the weak stance taken by the Western Allies towards the Soviet Union, and also of the impotence and ambivalence of Western public opinion vis-à-vis communism, he believed that his project in the cause of Polish independence ought to be self-reliant and have a solid organizational and financial base. The guiding principles for the Institute were financial independence and a total freedom from links with any émigré political groupings and parties.

From the beginning Giedroyc saw his Institute as an émigré cultural institution. He understood that freedom of expression was a necessary condition for the attainment of Polish independence. Apart from literature per se, he wished to publish works on political and social issues. In 1946, when sketching out his publishing goals, he wrote: “making readers aware of their range and development (...) will provoke a chain of thought that must in turn lead to the underpinning of Polish life with the principles of political equality, social justice, and respect for human rights and human dignity. The time is near when the books on these subjects published by the Institute will be required reading, not just for the politically and socially active, but for every contemporary, cultivated Pole”.

Pilgrimage towards freedom
One of the first volumes brought out by the Institute was Adam Mickiewicz's Books of the Polish Nation and Polish Pilgrimage. It had a preface by Gustaw Herling-Grudziński, who re-contextualized the early 19th-century work for a contemporary public. The idea of the “pilgrimage towards freedom” could be seen as encapsulating the mission of the Institute.
Next to works of high literary merit such as Jerzy Stempowski's Diary of a journey through Austria and Germany, and Bolesław Miciński's A portrait of Immanuel Kant and three essays on War, the Institute also published war novellas and lighter reading such as Sergiusz Piasecki's “robber” trilogy. Other important titles from the Institute's Roman beginnings included reprints of books by Sienkiewicz, Reymont, Sieroszewski, Strug and Kaden Bandrowski. In Rome, the Institute also printed and published books for the Polish army. Stanisław Gliwa, who later ran a notable eponymous private press, designed the covers of the Institute's publications and the Ionic column logo that would grace Kultura and the Institute's publications for decades to come. The first issue of Kultura, initially conceived as a quarterly, appeared in June 1947 under the dual editorship of Giedroyc and Herling-Grudziński.
The demobilization of the Polish 2nd Corps, the growing competitiveness of Italian printers, Rome's increasing remoteness from Polish émigré life, and above all the difficulty of maintaining contact with Poland from Rome, made change inevitable. After selling the printing press and settling all debts, the Literary Institute relocated to France. It had become financially independent of the Polish 2nd Corps. After the general demobilization of the Polish Armed Forces in the West in the spring of 1948, the Institute also lost its remaining organizational ties with the Polish military.

Stabilization in France
In France a new home was found for the Institute in Maisons-Laffitte near Paris. Apart from Giedroyc himself the editorial team comprised Józef Czapski, and Zofia and Zygmunt Hertz. (Gustaw Herling-Grudziński had decided to move to London.) In 1952 Henryk Giedroyc joined the editorial team. Funds remaining from the liquidation of Casa Editrice Lettere and its equipment were insufficient to support anything but Kultura, which now became a monthly. The first French issue appeared in the autumn of 1947, and within a few years profits from the increasing subscription base allowed for the mainstream resumption of book publication in 1953. The first volume of the new Biblioteka Kultury series was Witold Gombrowicz's Trans-Atlantyk published jointly with his Ślub (The Wedding). The same year saw the publication of Czesław Miłosz's The Captive Mind. Both these authors would consign all their future work to the Literary Institute.

Apart from established authors, Giedroyc was keen to promote new writing and from 1954 did so systematically. Authors making their debuts included Marian Pankowski, Leo Lipski and Andrzej Chciuk. In 1958 he republished W Polu (In the Field) by Stanisław Rembek, a writer living in Poland, and from this time the presence of writers living in communist Poland features strongly. Alongside literature, the Institute published books on philosophy, politics and sociology by such authors as James Burnham, Raymond Aron, Jeanne Hersch, Aleksander Hertz, Daniel Bell, Milovan Djilas, Simone Weil, Albert Camus, and Wiktor Sukiennicki.
From the outset, Giedroyc was implementing his policy of widening the Polish arena for debate with the introduction of fresh ideas.
As circulation of the Institute's publications was banned in the People’s Republic, they were adapted for clandestine export to Poland. For instance, George Orwell's 1984 was given a jacket depicting a Soviet poster; The Seizure of Power by Miłosz travelled to Poland disguised as a fictitious book (Liberation by Zygmunt Kornaga, published by the Wanda Wasilewska Association of the Builders of People's Poland). Important articles and essays from Kultura and the Zeszyty Historyczne were re-published as pamphlets, and together with books were often sent by post to Poland to arbitrarily chosen addresses picked from Polish telephone directories.
In the 1980s, 15 book titles were republished on bible paper as miniature editions alongside 30 issues of the Zeszyty Historyczne and 11 previously published issues of Kultura.

A new home
In 1954 the Institute was forced to relocate from its first, rented, base in Avenue Corneille to 91 Avenue de Poissy, also in Maisons-Laffitte. Purchase of new premises was possible due to the magnanimous response of Kultura's readership to an appeal, which allowed the cost of the building to be paid off within two years. As donations continued, Giedroyc formed the Kultura Fund with the explicit aim of assisting his fellow countrymen in Poland and any in exile who were in need. A 1947 Kultura editorial noted that “connecting Poles who live and work creatively in Poland with those of us who consciously chose political exile, carrying assistance where needed, is only a matter of tact, common sense, and a fair division of roles”.

The shape and reality of Stalinist Poland were well documented in five thematic studies published between 1952 and 1953 as Kultura’s Zeszyty Krajowe (Polish Notebooks).
After Gomułka’s political thaw in 1956, many Polish writers established direct contact with the Institute, among them Stefan Kisielewski, Witold Jedlicki, Artur Maria Swinarski and Andrzej Stawar. Czesław Miłosz, Marek Hłasko and Andrzej Stawar were given refuge when they chose to remain in the West. Here too, they published their first books as émigrés, as did, in addition to those mentioned above, Henryk Grynberg, Piotr Guzy, Leszek Kołakowski, Włodzimierz Odojewski, Leopold Tyrmand, and others.

First editions, reprints, debuts
Giedroyc was habitually open to new talents (Halszka Guilly-Chmielowska, Leo Lipski, Zygmunt Haupt) as well as to established writers (Jerzy Stempowski, Stanisław Vincenz, Kazimierz Wierzyński, Józef Wittlin). The editor-in-chief gave prominence to the cultures and histories of other East European countries, with Ukraine granted pride of place. Giedroyc published, in Ukrainian, an anthology of Ukrainian poetry from 1917 to 1933 Rozstriliane widrodżennia (Executed Renaissance) compiled by Yuriy Lavrinenko, also the book Ukraina 1956–68 by Ivan Koshelivec, and Nationalities Policy in the USSR by Boris Lewytzkyj. Given that the anniversary of the Treaty of Hadiach of 1658 passed unnoticed in Poland and the Soviet Union, Giedroyc commemorated the event with the publication of a book by Stanisław Kot (Jerzy Niemirycz, 300 Years After the Treaty of Hadiach). In 1987 the Institute also brought out a Polish translation from French of a work by Daniel Beauvois (Poles in Ukraine in the Years 1831–1864).

The Hungarian Revolution of 1956 was marked with the publication of an anthology of Hungarian writing translated into Polish, while in 1966 a book on Polish-German Dialogue in the Light of Ecclesiastical Documents sought to rebalance the relationship with Poland's western neighbour.
Giedroyc’s clandestine contact with the Russian dissidents Andrei Sinyavsky and Yuli Daniel led to the initial publication of their work in Polish and its subsequent translation and dissemination worldwide. Russian authors published by the Institute included Svetlana Alliluyeva, Andrei Amalrik, Boris Pasternak (Doctor Zhivago became Giedroyc's all-time bestseller and ran to three editions), Andrei Sakharov and Aleksandr Solzhenitsyn. Russian anthologies of short stories were also published together with volumes of clandestine papers documenting Soviet dissent.
The Institute also brought out translations, such as Marek Hłasko's Cemeteries in Czech and Józef Łobodowski's lyrical poetry in Ukrainian. Foreign-language publications included works by Andrei Sinyavsky in the original Russian, and The Universal Declaration of Human Rights, which the Institute published in several East-European languages. Periodically it also published special issues of Kultura in Russian, Czech, Slovak and German.

In Poland
The 1970s saw the publication of a number of first editions by authors who lived and worked in Poland. This was pioneered by Stefan Kisielewski, who in 1967 consigned the first of several novels to the Literary Institute. They were published under Kisielewski's well-guarded pseudonym Tomasz Staliński. A year later Jerzy Andrzejewski followed suit with Apelacja (The Appeal), published under his own name. Further prose writing came from Kazimierz Orłoś, Bogdan Madej, Wiktor Woroszylski, and in the 1980s Marek Nowakowski; volumes of poetry from Jacek Bierezin, Stanisław Barańczak, Ryszard Krynicki and Janusz Szpotański; and political writing from Władysaw Bieńkowski, Adam Michnik, Jacek Kuroń, and Jakub Karpiński.

Assisting the underground
Pre-Solidarity Poland and martial Law Poland of the 1970s and 1980s spawned a myriad world of unofficial imprints and printing shops. During this time, this clandestine world of publishing relied heavily on the Institute’s back list as well as its current output. A bibliography of Polish underground publications (1977–90) cataloguing books published outside the censor’s reach identifies 1073 titles originally published in Maisons-Laffitte. The Institute also smuggled into Poland innumerable publications from other Polish and non-Polish publishers in the West. Giedroyc actively fundraised for Poland's underground publishers and was able to deliver both financial assistance and printing equipment to these “soldiers of the free word”.

The Literary Institute’s contribution to uncensored Polish letters is immense and its place in history is that of Poland's most influential émigré publisher in the latter half of the 20th century.