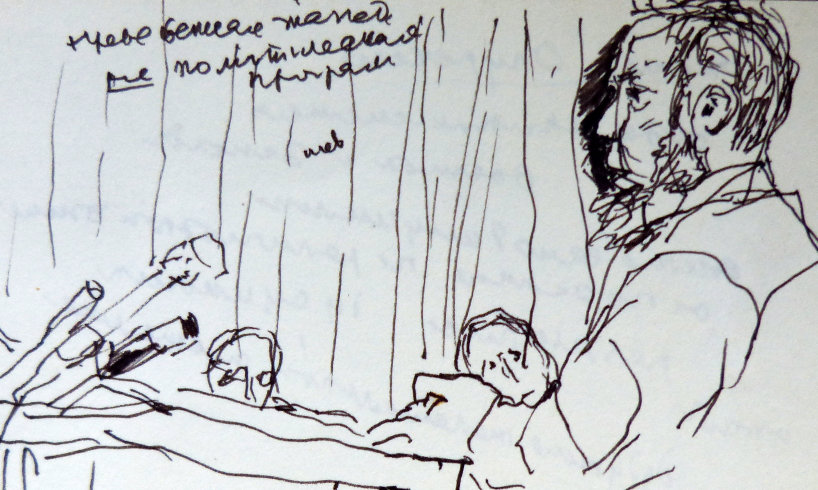 
Notes made by Norbert Żaba at the Press Conference given by Aleksandr Solzhenitsyn in Stockholm on 10 December 1974.

After the press conference, through the good offices of the Swedish Foreign Office official coordinating Solzhenitsyn’s visit and his diary, I was able to talk to Mme Solzhenitsyn, who invited us to come to their suite in the Grand Hotel at 7.00 pm. We had wanted to give him our address details. Solzhentisyn greeted us warmly, and elsewhere I reproduce verbatim what he said to us in the communiqué which I wrote. I was able to inform him that I had sent 60 copies of “The Gulag Archipelago” to Poland, and about a further 20, in Russian, to the Soviet Union.

About 60 members of the foreign press had come to Sweden for the Nobel awards ceremony, swelling the ranks of the permanently accredited correspondents and the local Swedish press, all in all there were about 200 people in the conference hall. The microphones worked poorly, the translator (a Russian woman) and her assistant translated inaccurately. Solzhenitsyn spoke in Russian, she translated into English. There was no Swedish interpreter. She occasionally omitted words or translated poorly, not giving true English renderings of his very precise and acute choice of words, so that often the clarity and even the import of what he was saying was lost. Solzhenitsyn himself, inexperienced in giving press conferences, lost himself in details and unnecessary historical excursions, so that some questions did not receive appropriate answers. That morning, he had received questions in writing, which he organised into groups, but because not all the correspondents had done this, he also accepted verbal questions from the hall. The press conference lasted from 1.00 to 5.30 pm, with one ten-minute break. It was unfortunate that over a half of the correspondents left part of the way through, as nearing the end, when he was rather tired, he not only spoke more concisely but it was only then that he addressed ideological issues. Swedish television presented a 15 minute reportage, and all radio reports only gave summaries.

I expect that tomorrow shall see a worldwide storm of vituperation, for he spoke out strongly not only against communism, but also against socialism and Marxism; he quoted Marx, who had advocated the terror of the French Revolution, the use of terror to crush opponents, as prescribed by Marat. He said he was not a socialist, and that those who called him a socialist were mistaken.

He began with criticism directed at western journalists who seek sensation and not the moral and ideological problem at issue, who miss the substance of the problem and twist what the interviewee is trying to get across, who are naïve and do not understand the Soviet mind.

He apologised to us that he has no experience in taking a press conference (the Swedes had left him a free hand, their Foreign Office and Security Services staff confined to checking IDs and controlling entry, to keep out demonstrators and people who had no business to be there. Before the hotel stood upwards of a dozen policemen.) Everything passed off peacefully and amicably – there were not even any calls of protest when he attacked socialism in general, indeed several times there was applause. Nevertheless, the press conference was a chaotic affair, one of the worst I had ever experienced. However, because of his manifest sincerity, the detail of his answers and his spontaneity, it proved exceptionally interesting.

Solzhenitsyn accused the press of naïvety in trying to do “man in the street” interviews in the Soviet Union, as also in doing telephone interviews in Moscow. He began by responding to a question about Raoul Wallenberg, the young Swedish diplomat who aided the escape of Hungarian Jews, arrested by the Russians in 1944. He believes that Wallenberg is still alive, and accuses the Jews of not mobilising world opinion to save someone who saved so many of them, whereas they have demonstrated that they are quite capable of doing so by managing to extract many Jews out Russian prisons. (And now, you will no doubt see, he will be accused of antisemitism.)

The world should not be demanding the emigration of people out of Russia or the East, but first and foremost “Freedom at Home”, that Russia should make peace in its own house, in the communist countries.

He said it was necessary for the nations of Eastern Europe to cooperate against evil, and that each nation should begin to fight against evil and repression at home.

He stated that he has been misunderstood. He is not against democracy, but Russia today is even more unprepared for democracy to take root than it was in 1917, when it ended in a bloodbath. Democracy should be introduced into Russia in stages.

He also spoke of the Ukraine, of Estonia, Latvia and Poland. He was full of admiration for the resistance of Lithuanians in the labour camps.

It was communists in the West who created the legend about the XXth Party Congress – in which it is Stalin who is responsible for distorting communism. Some young Soviet communists believe the same, but say they do not know how to remedy this. Medvedev is a very convenient propagandist for the regime, creating a false narrative about communism for western consumption. Solzhenitsyn took issue with his book and argued that not only Stalin, but Lenin and Marx before him, had created the theory of the necessity of using terror. There was no such thing as socialism with a human face. Stalin was merely executing what Lenin and Trotsky had mandated, whereas Lenin had drawn on Marx. “No one is as adept as Medvedev in defending the interests of the regime.”

He had very hard words to say about Ceaucescu’s regime in Romania, and said something about Yugoslavia, Tito and Mihailović, which I did not quite follow. He spoke of the „myth of Yugoslavia”.

He stated that despite their public discussions, his views and Saharov’s were moving ever closer together. He referred to the second issue of “Kontinent”.

World opinion should be putting pressure on the Soviets to allow Poles still held in the Soviet Union to return to their own country.

He averred that dissidents – representatives of Russian culture – would continue to be expelled by force, but to no avail. The Soviet Union will now never get rid of the opposition.

He is against revolution and bloodshed, but is urging a “moral revolution” –required also in the West.

He compared life in the West and in the East, criticizing western materialism, and accusing American industrialists of being ready to sell out freedom to Moscow in exchange for short term profits. He said that “revolution” never solves any problems.

He yearns for a normal Russia, and to return there.

He is “shocked” by the bad translations of his books. Eastern translators, being themselves talented writers who are not allowed to write what they think, often make the best translators.

Literature is not wholly unfettered in the West, as publishers primarily interested in sales urge writers to appeal to mass taste. The time when writers wrote for an elite readership, before the advent of the phenomenon of mass-market books, was actually freer. He urged writers not to give in to pressures from their publishers.

This review, albeit somewhat chaotic, nevertheless sets out the thread of Solzhenitsyn’s most important ideas.