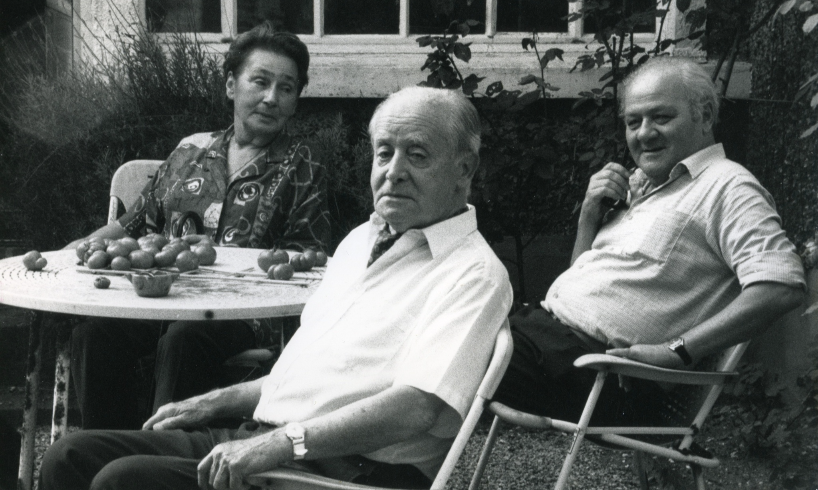 
Writer and journalist. A close collaborator of Jerzy Giedroyc.
His childhood and youth were spent in rural Suchedniów and in Kielce, where he attended the Mikołaj Rej Secondary School. Between 1937 and 1939 Herling-Grudziński studied Polish philology at Warsaw University. He made his literary debut with articles for Kuźnia Młodych (Forge of the Young), and soon after started publishing pieces in the weekly magazines Ateneum (Athenaeum), Pion (The Vertical) and Pióro (The Pen). He also edited the literary pages of the fortnightly Przemiany (Transitions) at the turn of 1937–8, and then from February 1938 of the weekly Orka na Ugorze (Toil on Fallow Ground).
War and Deportation
After the outbreak of War on 1 September 1939 Herling-Grudziński co-founded a Warsaw underground cell called PLAN, and set out for Western Europe via Lithuania as its emissary. In 1940 he was arrested by the NKVD, accused of being a spy, and deported to a Soviet labour camp. He recounted his incarceration in the Yertsevo and Kargopol camps (near Arkhangelsk) in A World Apart, a compelling narrative of life in the Soviet Gulag. He joined the Polish army, which had been formed in Soviet Russia after the conclusion of the Sikorski-Maysky Agreement, and with it reached the Middle East via Persia. In 1943 he befriended Józef Czapski and Jerzy Giedroyc. For his part in the Battle of Monte Cassino he was awarded Poland's highest decoration for valour, the Virtuti Militari.
London, Munich and Naples
After the war Herling-Grudziński settled for a short time in Rome, where he headed the literary section of Orzeł Biały (White Eagle). In 1945 an anthology of his essays entitled Żywi i umarli (The Living and the Dead) was published with a foreword by Józef Czapski. Herling-Grudziński had previously published work in various army periodicals such as W Drodze (On the Way), Kurier Polski (The Polish Courier) and the Dziennik Żołnierza APW (Soldier’s Daily of the Army in the East). After the demobilization of the Polish Armed Forces in the West, he lived in London between 1948 and 1952 with his first wife, the painter Krystyna Domańska. He wrote for the London-based Polish literary weekly Wiadomości (News) and for Na Antenie (On the Air). After Krystyna's death, Herling-Grudziński moved to Munich and headed the Cultural Section of the Polish language service of Radio Free Europe. In November 1955 he relocated to Naples, where he married Lidia Croce, the daughter of the Italian philosopher Benedetto Croce. In Italy his work was published in Tempo Presente, Il Corriere della Sera, Il Giornale and L’Espresso. In Poland his writing was only available from the country's underground publishers as it was banned by the communist authorities up to 1988. His short stories were published in English, French, German and Italian. In the years 1974–92 Herling-Grudziński was a member of the editorial board of Kontinent, an influential Russian émigré journal.
Partings and Reunions
Herling-Grudziński’s association with the Literary Institute dates back to his time in Rome. He became a prime mainstay of the Giedroyc project. Kultura published many of his essays, short stories, and appraisals of West and East European literature. He also wrote political commentaries, reviewed books and undertook translations. In Rome he had been in charge of the Literary Department of the Casa Editrice Lettere, and in the years 1946–7 co-founded Kultura itself and co-edited its first issue. During his time in London and Munich his work for the Literary Institute tapered off. From 1956, however, Herling-Grudziński resumed a markedly more active role and his cooperation with the Institute assumed centre stage in his professional activities. In 1966 he became Kultura’s permanent Italian correspondent and from June 1971 his Dziennik pisany nocą (Diary Written by Night) was regularly present on the pages of Kultura until 1996 and his rift with Giedroyc. From that year, publication of the Diary was transferred to the Warsaw-based daily Rzeczpospolita (The Commonwealth).
Herling-Grudziński was awarded Poland’s highest honour, the Order of the White Eagle, in 1995.
He died of a brain haemorrhage on 4 July 2000 and is buried in Naples in the cemetery 0f Poggioreale.
For a select bibliography and other information, please refer to the notes at the end of the biographical note in Polish.