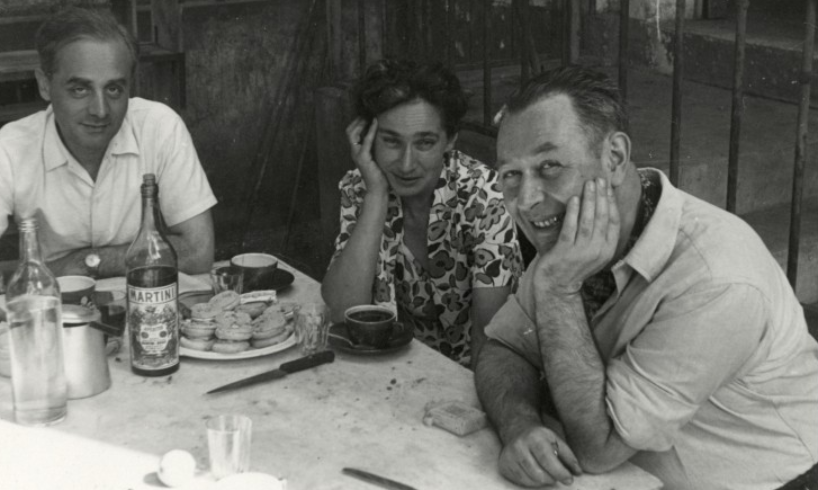 War and Deportation
At the Literary Institute
The Buzzing Bumble-bee


Zygmunt was the son of Mieczysław and Maria née Maybaum. He spent his childhood and youth in Warsaw and Łódź.
After passing his matriculation examinations at the Merchants’ High School in Łódź in 1926, Zygmunt was sent to England to study economics, first at Owens College in Manchester and then at the London School of Economics. He probably did not complete these courses.
Pre-war Poland
On his return to Poland Hertz took up various jobs – as a dockworker in Nowy Port in Gdańsk (Free City of Danzig) and in the office of his father, a trade representative of the Belgian chemical company Solvay for Poland. He completed his reserve officer training at Warsaw's Anti-Aircraft Artillery Training Centre.
At the beginning of 1938 Hertz met Zofia Neuding. A year later, on 11 February, they married.
In August 1939 Zygmunt was mobilized and joined the 1st Anti-Aircraft Artillery Regiment. He was charged with transporting artillery pieces to Warsaw from Brest Fortress  (now in Belarus), which proved impossible to carry out. However, it was enough for Zygmunt to be dismissed from the army.
War and Deportation
Zygmunt joined his wife in Stanisławów (now Ivano-Frankivsk, Ukraine) at the beginning of 1940. They decided to return to Warsaw, but were arrested in Lwów (now Lviv, Ukraine) by the NKVD and deported to the Mariyskaya ASSR.
At the labour camp in Tsynglok, Zofia and Zygmunt were put to felling trees for 14 months. After the conclusion of the Sikorski-Mayski Agreement they were released and together joined the rapidly growing Polish Army in the East
being formed in the USSR from Polish deportees. On 12 August 1942 this Polish force under the command of General Władysław Anders was evacuated to Persia and transferred under the command of the Allies, whereupon it became known as the 2nd Polish Corps. Zygmunt was assigned to the 8th Heavy Anti-Aircraft Artillery Regiment of the 2nd Polish Corps, with which he saw action right up to the Italian campaign, where he took part in the Battle of Monte Cassino.
At the Literary Institute
In 1946 Hertz joined the Literary Institute and helped to organize its activities in Rome. His duties included book dispatch, building a subscriber base for Kultura, running an editorial reference library, assembling press cuttings, and general administrative work. He occasionally assisted in proofreading and other editorial tasks.
In 1948 his status as a political émigré was recognized in France, but he never sought French citizenship.
Hertz died on 5 October 1979 in Maisons-Laffitte, and was buried in the cemetery in Le Mesnil-le-Roi.
His contribution to the Institute was honoured with a literary prize in his name, which was granted annually between 1979 and 1999.
The Buzzing Bumble-bee
Zygmunt Hertz is remembered as a friend and counsellor to the numerous Poles visiting Maisons-Laffitte. He had the rare ability of instantly winning over the people he met. An acute observer, he could maintain, despite his warm gregariousness, a sense of detachment and self-deprecation. Alternatively nicknamed Sancho Panza and Philanthropos, he was recognized as Maisons-Laffitte’s minister of human hearts. Czesław Miłosz described him as the buzzing bumble-bee, which seemed to sum up his character, but he also perceptively noted that Zygmunt made an emotional investment into the Giedroyc project. Giedroyc himself was well aware that Zygmunt's involvement with the Institute was in no small measure an extension of his love for his wife: “His contribution to the work of the Institute is colossal, but whatever he does for the Institute, he does for Zosia”. In his autobiography, he went on to say that the “The contribution made by Zosia and Zygmunt Hertz to the history of the Institute was decisive for its success. They were involved in all matters, including those that demanded complete discretion…their role was fundamental, without them I doubt whether Kultura could even have been started, let alone survived”.
In his last letter to Giedroyc, Andrzej Bobkowski wrote “I like and value Zygmunt and Zosia immensely. Not many people could have devoted themselves so utterly in the way that they did”.
No results found