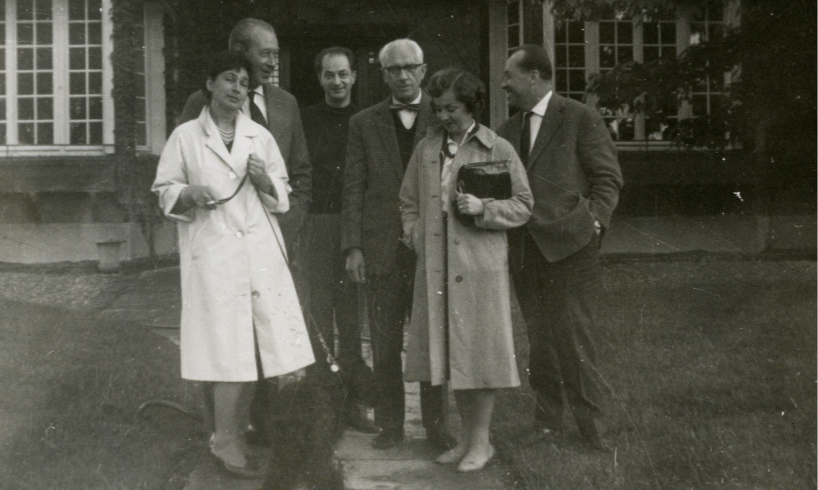 
Ukrainian columnist, journalist, sovietologist, and historian of East-Central Europe.
Osadchuk spent his childhood in the Kielce region (Poland), in Boszczynek and Przybenice near Pinczów, where his father was a teacher. He was expelled from his secondary school in Pinczów when he spoke out in defence of a Jewish classmate. He passed his matriculation examinations in 1941 after completing a course for Ukrainian students in Kraków. He studied the history of East-Central Europe and the Balkans, international law, and Eastern languages at the Humboldt University of Berlin, obtaining his master’s degree in 1944 with a thesis on the press in Transcarpathian Ukraine.
After the war, Osadchuk worked in the Polish Military Mission in Berlin up to the end of 1949, when he crossed over into West Berlin. He began writing for the newspaper Die Neue Zeitung and also for numerous other Ukrainian, Polish and German-language papers, including Die Neue Zürcher Zeitung and Der Tagesspiegel, where he wrote under the pseudonym Alexander Korab.
Osadchuk obtained his doctorate from the Free Ukrainian University in Munich and in 1966 was appointed professor of East European modern history at the Free University in Berlin. In the years 1984–7 he co-published the Ukrainian émigré journal Віднова (Vidnova).
Osadchuk had met Jerzy Giedroyc and Józef Czapski at the inaugural meeting of the Congress for Cultural Freedom in June 1950 in Berlin, and his links with the Literary Institute and close association with Giedroyc date from this time.
He made his debut in Kultura’s issue 5/55 of 1952 with “Kronika polsko-ukraińska” (Polish-Ukrainian Chronicle) in a new regular column, “Kronika ukraińska” (Ukrainian Chronicle). Thereafter, he was a regular contributor right up to the last issue, generally writing articles on Ukrainian émigré life, Ukrainian-Polish relations, and the political situation in Germany and the Eastern Bloc.
Osadchuk was awarded the Kultura Friendship and Co-operation Prize in 1983.
In his introduction to a collected edition of Bohdan Osadchuk’s articles, Jerzy Giedroyc wrote: “Bohdan Osadchuk was and is not only a meticulous guide to Polish-Ukrainian relations, but most importantly he paved the way for Kultura to make connections with key Ukrainian émigré activists. When we started out, we were not wholly aware what the Ukrainian émigré community in the West was like, and here Osadchuk was an invaluable intermediary. Indeed, thanks to him we began our close co-operation with Borys Lewytzkyj, a number of whose books we published within Kultura Library”.
For a select bibliography and other information, please refer to the notes at the end of the biographical note in Polish.
No results found