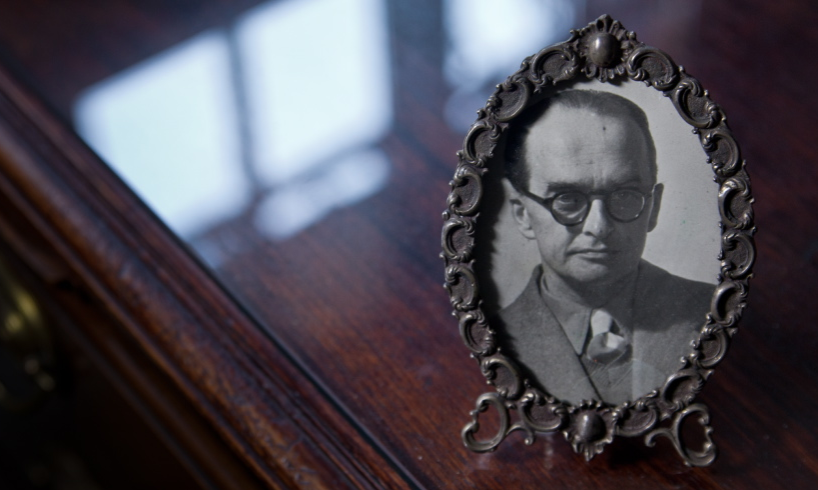 
Diarist, journalist, and political commentator.
Mieroszewski came from a landowning family. His father Juliusz Kazimierz, a doctor, exerted a strong influence on him during his formative years. His mother Maria was from the distinguished Dunikowski family. After her death, Mieroszewski lived with his father and brother Sobiesław in Limanowa, and there spent his childhood and youth. His secondary education started at the Jesuit School in Chyrów, then continued at the Jan Długosz Secondary School in Nowy Sącz. Thanks to his governess Eugenia Wolf, he had imbibed German culture and was bilingual in Polish and German.
Early Years
In 1924, after passing his matriculation examinations, Mieroszewski started reading philosophy at the Jagiellonian University in Kraków, switching after a year to law, which he also failed to complete. In 1926–31 he studied economics at the Higher Business School in Kraków.
Following a spell working at Bank Hipoteczny, he began his career as a journalist on Ilustrowany Kurier Codzienny (Daily Illustrated Courier), part of Marian Dąbrowski’s press empire. At the turn of 1935–6 he became part of its editorial team on the international desk, specializing in German affairs. He lived in Kraków right up to the outbreak of the war. Having been assessed unfit for active service on medical grounds, he was not called up and took no part in the September Campaign of 1939.
War
Mieroszewski left Poland with his wife Maria and daughter Monika, crossing the border into Romania at Kuty on 17 September. From December 1939 he worked in the Education and Culture section of the Military Attaché’s Office at the Polish embassy in Bucharest. Once the embassy was closed and its staff evacuated, he made his way via Istanbul and Cyprus to the Middle East. He was called up, and on 18 April enlisted in the Polish Independent Carpathian Rifle Brigade in Haifa. From 1942 he served in the Education and Culture section of General Anders’ Army, editing the weekly Ku wolnej Polsce (Towards a Free Poland). His friendship with Giedroyc dates from this time. From October that year he was assigned to the editorial team of Orzeł Biały (White Eagle), from February 1943 to the Army’s Department of Information and Education, and finally, following the Army’s reorganization, to the Culture and Press Department of the 2nd Polish Corps. In the years 1943–6 he edited the fortnightly Parada (The Parade), from its first to its last issue.
London
After demobilization in December 1946 Mieroszewski moved to Great Britain and entered the Polish Resettlement Corps. He lived in London from 1947 to the end of his life, never leaving the city. He initially worked with the literary weekly Wiadomości (News) and Orzeł Biały (White Eagle), and then wrote for Dziennik Polski (Polish Daily) in Detroit. He also worked for the BBC and quite regularly in the years 1960–66 for Radio Free Europe.
Colleague and Friend
Mieroszewski’s relationship with Kultura started with his first article in the October 1949 issue, “Pochlebcy znużenia” (Flatterers of Weariness). Within six months he was the journal’s London correspondent, as announced in the April issue of Kultura on its editorial page.
Of all of Giedroyc’s close associates, Mieroszewski was one of the closest. He stood out among Kultura’s outstanding journalists. He gave to Kultura its voice and to Giedroyc a one-man think-tank. He wrote only for Kultura, never for the Zeszyty Historyczne. He initially had a regular column, “List z Wysp” (A Letter from the Isles), in the Archiwum Polityczne (Political Archive) section. He then wrote the “Kronika angielska, emigracyjna i londyńska” (English, Émigré and London Chronicle) under the pseudonym “Londyńczyk” (Londoner). In time, Mieroszewski’s articles would very often open an issue of Kultura, setting out the journal’s – and Giedroyc’s – editorial stance, and bearing witness to the quality of his writing. In point of fact, Kultura was for him a vocation to which he devoted his entire professional émigré life. The fullest evidence of his devotion and loyalty is his body of work, perhaps above all the huge volume of his correspondence numbering thousands of letters.
Tributes
In his autobiography, Giedroyc wrote “Mieroszewski’s most important contribution to Kultura was his journalism – it was largely thanks to him that Kultura existed as a political journal. It was not only the originality of his ideas but also his writing style that I came to value very highly: he was concise and economical in the way he formulated his ideas, without all the verbal curlicues that are so characteristic of Polish (and other) writers. It was indeed a rare quality. But I consider the most important element of his legacy to be the concept of ULB (Ukraine, Lithuania, Belarus). Other matters he wrote on related to the ever-changing political scene, and thus often lost their relevance – but the ULB concept has permanence. I am convinced that as its creator Mieroszewski will hold a high place in the history of Polish political thought after the Second World War”.
The editorial in Kultura marking the passing of Juliusz Mieroszewski ended with the words: “Of course Kultura will manage without him, but it won’t manage ‘perfectly well’ as he had always claimed it would, with exaggerated modesty. His death has caused a breach that cannot be filled. A part of Kultura has died with him” (Kultura 1976, no. 7/346 – 8/347, p.2.).
For a select bibliography and other information, please refer to the notes at the end of the biographical note in Polish.