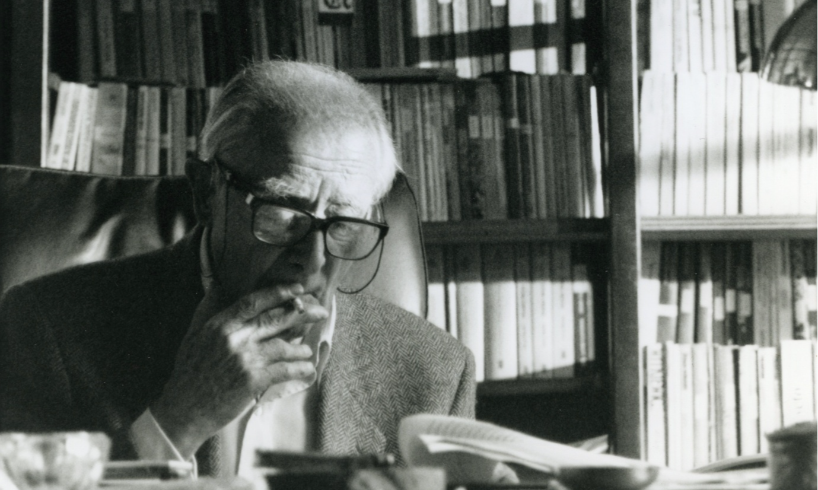 
He died aged 94, creatively active to the end, and that not as a private individual but as an institution – an institution that he created and personified, and which played a crucial role in Polish and in 20th-century European history. He died as he surely would have wished, in the full flow of work: the September issue (no. 636) of Kultura had been despatched to subscribers a few hours before, and he was completing work on the next, October, issue. That day he had been to a clinic for tests; that night, between 14 and 15 September 2000, in his sleep, his heart stopped: une morte subite, a sudden death, said the doctors.

To the last he had maintained an astonishingly agile mind, a capacity for hard work and his wide-ranging curiosity. I was witness to this at meetings of the Aid Fund for Independent Polish Literature and Research. He was the eldest among us, more than half a century older than our youngest member, yet it was his eyes that suddenly lit up, remembering a scholarship granted to someone years ago, or asking pertinent questions about how some funds had been used; it was he who at that last meeting raised the idea of asking Polish entrepreneurs for financial support, and not many days before his death had already sent out the first fundraising letters.

On his death, he had outlived Prince Adam Czartoryski by three years. For decades it had been clear that their respective achievements were comparable. Over 40 years previously, in a jokingly elegiac piece on Kultura, which can still surprise us by its accuracy and liveliness of style, entitled “Zagubieni romantycy: panegiryk – pamflet – próba nekrologu?” (Displaced Romantics – Panegyric, Monograph, or First Draft of a Eulogy?), Wacław Zbyszewski had stated that to the places in and around Paris irrevocably linked to the history of Poland should be added one more: Maisons-Laffitte. But today the comparison of these two giants, Czartoryski and Giedroyc, requires some development: of Giedroyc it should be said that he was a Czartoryski with a wider ambit, as he fundamentally transformed Polish politics and culture and inextricably entwined the two, but first and foremost he was a Czartoryski whose plans and ambitions had actually come to fruition. Kultura’s home, though not as splendid as the Hôtel Lambert on the Île Saint-Louis, has as its epilogue an independent Poland within a geopolitical situation the like of which we have not had for centuries: we take our place among states of East-Central Europe with democratic – and relatively stable – structures; and we have normal relations with an independent Lithuania, an independent Ukraine, an independent Czech Republic, an independent Slovakia, a democratic and united Germany, and a Russia free of communism.

Several generations have undertaken the pilgrimage from the suburban railway station, along the curving Avenue Charles de Gaulle, to the home of Kultura in its leafy setting. A walk with one’s pulse racing: emotion, for this was ever a mythical place; in past times fear, for visits here were once forbidden; embarrassment and awkwardness at meeting a person worthy of great respect, and at the same time so difficult to get through to; and finally, it has to be said, sheer terror of the unpredictable fits of bad temper afflicting the despotic ruler of the house – Fax, the last and most chimerical of the Kultura dynasty of cocker spaniels.

These days I am especially moved when I think of Zofia Hertz, who accompanied Jerzy Giedroyc’s endeavours for almost 60 years; he would stress that without her Kultura could not have existed, and this was indeed obvious to all. I think of his brother Henryk Giedroyc, who also dedicated his life to Kultura; their house owes much to his good sense, his conscientiousness, and his tact. And we all owe so immeasurably much to those creative talents who gathered round the journal, and whose spirits found breathing space within its pages. With Kultura and its publications Jerzy Giedroyc created a universe more permanent than the span of his life or the lives of those who touched his. It was he who published the most important Polish works of literature of the 20th century, the works that define the 20th century. They will last as long as interest in Polish letters persists.

Now, faced with his death, as I contemplate the legacy of Jerzy Giedroyc, I am overwhelmed with a feeling of gratitude. And also of joy. I feel enriched by, and take great happiness from, the realization that we are living at a time of a Polish renaissance, a rebirth both cultural and social. And it was Jerzy Giedroyc who was among the greatest of the co-creators of this renaissance – one could indeed say that he was its editor-in-chief. I discerned this renaissance in the works of Gombrowicz and Miłosz, and also of Czapski, Herling-Grudziński, Wat, Jeleński, Stempowski, and in recent decades it has encompassed ever widening circles: the radiating personality of the Polish pope, the independent social movements crowned by Solidarity, and finally the miraculous happenings of 1989. All these I accept as an unexpected gift from providence, a gift for which I hope I will never cease being thankful, and in which I hope I will never cease taking joy: the fall of the Berlin Wall, the fall of communism, the fall of the Soviet Union – they all changed the face of Poland, the face of Europe, they changed our way of thinking about humankind, of thinking about the world.

It brings joy to be living in such times. I do not feel at all that these changes belong in the past, quite the contrary: Kultura heralded ways of thinking that have only in recent times gained the right to public expression. And this is why I do not regard Jerzy Giedroyc’s death as the end of an era. Beyond the shadow of a doubt, he is the co-creator of a new era. The greatness of his achievement becomes apparent when we realize that his legacy will never disappear, it can never disappear. He opened up new paths and new vistas. The Polish literature marked out by these writer-outlaws is the literature of tomorrow. The politics of sovereignty, of freedom, the acknowledgment of values, this is the politics for today and tomorrow.


▶ Giedroyc’s Victory
▶ A Disposition for the Political...
▶ Malraux
▶ Mikhail (Michel) Heller – the “Polish Russian” of the Literary Institute