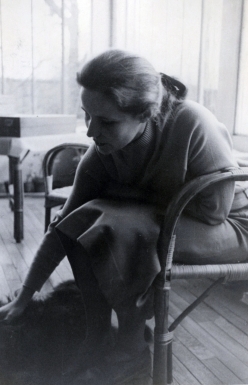 Kultura publishes a conversation between Jerzy Giedroyc and Stefan Kisielewski about the October 1956 events in Poland. An increasing number of Poland-based authors are published by the Institute. Maisons-Laffitte is visited by a group of young people associated with the Warsaw STS Club (among them Jarosław Abramov-Newerly, Andrzej Drawicz, Andrzej Jarecki, and Agnieszka Osiecka) who arrive at Avenue de Poissy with a typescript of Marek Hłasko’s Cmentarze (The Graveyard). Jerzy Giedroyc’s think-piece “To Readers in Poland”, in which he evaluates the political situation in Poland after the authorities withdraw from the October Thaw, is printed on Bible paper and smuggled into Poland.

POLAND
Gombrowicz's Trans-Atlantyk and Ślub (The Wedding) are published officially in Poland. The liberal weekly Po prostu (Quite Simply) is closed down. Retreat from the 1956 October Thaw.
WORLD
Rome Treaty creates the European Economic Community. Kwame Nkrumah of Ghana becomes the first African head of government in sub-Saharan Africa. The USSR is first into space with Sputnik 1. Albert Camus receives the Nobel Prize in Literature.
No results found