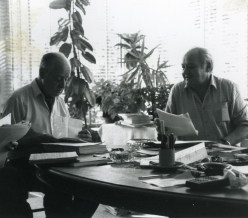 Gustaw Herling-Grudziński resumes his association with the Institute and becomes Kultura’s Italian correspondent. The Institute publishes the “Open Letter to the Party”, and also the conciliatory “Pastoral Letter of the Polish Bishops to their German Brethren”. Other publications include Dziennik (Diary) 1961–1966 and Operetka (Operetta) by Witold Gombrowicz, and Piękni dwudziestoletni (Beautiful Twenty-Year-olds) by Marek Hłasko.

POLAND
Leszek Kołakowski is expelled from the communist party after his censure of Gomułka in a lecture delivered on the tenth anniversary of the Polish October. Many writers and intellectuals resign from the party in solidarity. Celebration of 1,000 years of Christianity in Poland.